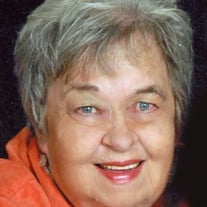 Ruth Spray, age 77, of Brownstown, Indiana, passed away on Thursday, October 27, 2016 at her residence. Mrs. Spray was a member of St. Peter’s Lutheran Church, Brownstown. She retired from Jackson County REMC after 27 years of employment. She was also a member of the Library Reading Club and the Life Light Bible Study. Mrs. Spray was an avid reader and was very passionate about life. Born on July 25, 1939, in Brownstown, Indiana, she was the daughter of Edwin and Josephine Pollert Allfeis, both of whom preceded her in death. On June 2, 1963, at St. Paul Lutheran Church, Wegan, she married Donald Edward Spray and he survives. Survivors include one daughter, Deborah Anne Robertson of Shelbyville, Indiana; three grandchildren: Natalie (Nicholas) Clifton of Indianapolis, Alyssa (Joshua) Taylor of New Whiteland, and Shana Robertson of Shelbyville; and three great grandchildren, Elijah Clifton, Wyatt Clifton, and Jozlyn Taylor. Besides her parents, she was also preceded in death by one sister, Sheila M. Roberts. Funeral services will be conducted at 1:00 p.m. on Tuesday, November 1, 2016 at Spurgeon Funeral Home, Inc., Brownstown. Friends may call from 11:00 a.m. until the time of the service on Tuesday at the funeral home. Interment will take place at St. Peter’s Lutheran Church Cemetery, Brownstown. Memorials may be given to the Bethania Orphan Home and the Brownstown Public Library. Online memorials and condolences may be given at [email protected]" title="Click to open in a new window or tab" target="_blank" rel="nofollow noopener">[email protected]

Ruth Spray, age 77, of Brownstown, Indiana, passed away on Thursday, October 27, 2016 at her residence. Mrs. Spray was a member of St. Peter&#8217;s Lutheran Church, Brownstown. She retired from Jackson County REMC after 27 years of... View Obituary & Service Information

The family of Ruth Spray created this Life Tributes page to make it easy to share your memories.

Ruth Spray, age 77, of Brownstown, Indiana, passed away on Thursday,...

Send flowers to the Spray family.