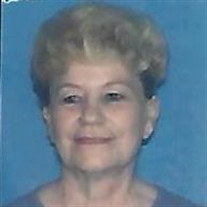 Sharlene Kay (Byrd) Trowbridge, age 78, of Norman, passed away on Wednesday, January 24, 2018, at her residence. Mrs. Trowbridge was a member of the Blackwell Apostolic Pentecostal Church on Toweridge Road near Bloomington and was a homemaker. Mrs. Trowbridge loved spending time with her family, reading the Bible, cooking, baking and gardening and being known as having a “green” thumb. She was also known as the “best” mother and grandma, bread maker, and listener to her family and friends. Born on September 1, 1939, in Columbus, Indiana, she was the daughter of Jesse and Nora Jewell Byrd, both of whom preceded her in death. On February 7, 1987, she married Walter Trowbridge and he survives in Norman. Survivors also include one daughter: Debra Shipley of Brownstown; one son: Richard (Denise) Clark of Elizabethtown; two step-sons: Tim Trowbridge of Bloomfield and Terry Trowbridge of Brownstown; one step-daughter: Tammy (Dan) Lindsey of Norman; 13 grandchildren; and 12 great grandchildren. She was also preceded in death by two sons: Terry Lee Shipley and Tracey Bryan Shipley; two sisters: Joy Holland and Louise Johnson; and one brother: Jesse Byrd. Funeral services for Sharlene Kay Trowbridge will be conducted at 11:00 a.m. on Saturday, January 27, 2018 at Spurgeon Funeral Home, Inc., Brownstown, with Paul Smith officiating. Friends may call from 4:00 p.m. to 7:00 p.m. on Friday, January 26, 2018, at Spurgeon Funeral Home, Inc. and from 10:00 a.m. until the time of the service on Saturday at the funeral home. Interment will be at Fairview Cemetery, Brownstown. Memorials may be given to Blackwell Apostolic Pentecostal Church. Online memorials and condolences may be given at [email protected]" title="Click to open in a new window or tab" target="_blank" rel="nofollow noopener">[email protected]

Sharlene Kay (Byrd) Trowbridge, age 78, of Norman, passed away on Wednesday, January 24, 2018, at her residence. Mrs. Trowbridge was a member of the Blackwell Apostolic Pentecostal Church on Toweridge Road near Bloomington and was... View Obituary & Service Information

The family of Sharlene Kay Byrd Trowbridge created this Life Tributes page to make it easy to share your memories.