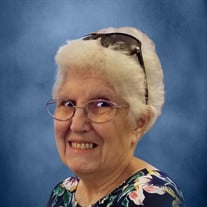 Shirley Dean (Mitchell) Barnard, age 85, of Zephyrhills, Florida, passed away on Wednesday, April 20, 2022. Mrs. Barnard was an active member of Zephyrhills First Church of the Nazarene in Zephyrhills, Florida. Born on March 28, 1937, in Shelbyville, Shirley was the daughter of Loyd Morris and Carrie Margaret (Graves) Mitchell, both of whom preceded her in death. Shirley grew up in Indiana, graduated from Argos Indiana High School in 1955, and worked as a nanny during her high school days. On February 17, 1956, in Indianapolis, she married Oakley Barnard, and he preceded her in death. Shirley and Oakley were married more than fifty years prior to his death. Mrs. Barnard lived in Brownstown during her first few years of marriage, and during these years she worked at the shirt factory in Seymour. Shirley was then a homemaker while she raised her children. She also worked at a resort hotel, and she worked for Mayflower Moving Van Lines. On March 17, 1967, Mrs. Barnard and her six children moved to Zephyrhills, Florida. While her children attended school, Shirley returned to further her education graduating from Hillsborough Community College and earning an Associate of Science Degree with a childcare endorsement. Subsequently, she worked at Pooh’s Corner and West Zephyrhills Elementary School before coming assistant site manager of the PLACE program at Woodland Elementary School, from which she retired in 2002. Shirley was also an active member of the Crystal Springs Community Association, volunteered as a poll worker, and was a member of CF Industries (Mosaic) CAP Advisory board. Survivors include three daughters: Brenda Shay of Zephyrhills, Florida, Lois (Jalal) Bineshtarigh of Dade City, Florida, and Carolyn (James) Speck of Brandon, Florida; two sons: Loyd (Mary) Barnard of Bartow, Florida, and Samuel (Deanna) Barnard of Countryside, Illinois; grandchildren: Eric (Kelly) Barnard of Brownstown, Sheryl Bineshtarigh of Dade City, Florida, Aaron (Abby) Barnard of Brownstown, Timothy Shay of Spokane, Washington, Benjamin (Deanna) Shay of Yukon, Oklahoma, John Barnard of Brownstown, Melissa Speck of Brandon, Florida, and Rebecca (Greg) Morris of Zephyrhills, Florida; several great-grandchildren; three sisters: Ruth Anderson of Grafton, North Dakota, Judy (Richard) Byers of Royal Center, and Gayle (Mark) Doucey, of The Villages, Florida; one brother, David Mitchell of Whiteland; one daughter-in-law, Kim Barnard; three sisters-in-law: Sarah Wooldridge of Medora, Ruth Hillenberg-Nelson of Norman, and Joyce Barnard of Seymour; and several aunts, uncles, nieces, nephews, and cousins, all of whom were much loved. Mrs. Barnard was also preceded in death by a son, Marvin Barnard; a grandson, Cameron Bineshtarigh; son-in-law, David Shay; and two brothers: Roland Mitchell and Charles Mitchell. Funeral services for Shirley Dean (Mitchell) Barnard will be conducted at 11:00 a.m. on Saturday, May 7, 2022, at Kurtz Church of the Nazarene with Pastor Floyd Fisher and Pastor Benjamin Shay officiating. Friends may call from 9:00 a.m. until the time of the service at 11:00 a.m. on Saturday, May 7, 2022, at Kurtz Church of the Nazarene. Interment will follow at Kurtz Cemetery. Memorials may be given to Donor’s choice. Funeral arrangements have been entrusted to the caring staff at Spurgeon Funeral Home, Inc., Brownstown. Online memorials and condolences can be given at www.spurgeonfh.com

The family of Shirley Dean (Mitchell) Barnard created this Life Tributes page to make it easy to share your memories.

Send flowers to the Barnard family.