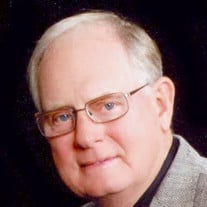 Steven F. Schepman, age 73, of Seymour, Indiana, passed away on Sunday, November 1, 2015 at Schneck Medical Center, Seymour. He was a member of St. John’s Lutheran Church, Sauers, where he held numerous church offices. Mr. Schepman was a farmer and served in the Indiana National Guard from 1959 to 1965. He was a 1960 graduate of Seymour High School and a member of the Ag Advisory Board of Seymour High School, Indiana Farm Bureau, Sauers Men’s Club and Sauers C Dartball team. He received an Honorary Chapter FFA Degree and also an FFA Outstanding Service Award in 2015. Mr. Schepman loved spending time with his family and friends, especially his grandchildren, and working in his shop at the farm. Born on September 15, 1942, in Seymour, he was the son of Hugo and Luella Hageman Schepman, both of whom preceded him in death. On June 29, 1963, he married Karen L. Wischmeier at St. John’s Lutheran Church, Sauers, and she survives. Survivors also include one son, Jay S. (Rachel) Schepman of Seymour; one daughter, Jeanna (Miron) Kharchilava of Powell, Ohio; one son-of-law, Andrew J. Moore of Seymour; seven grandchildren, Jacob Andrew Moore, Carson Kharchilava, Carrington Kharchilava, Nala Kharchilava, Preston Kharchilava, Lauren Schepman and Jackson Schepman; two sisters, Janet Cooper of Seymour and Rebecca (Jerry) Anderson of Seymour; and one brother-in-law, Curt (Mary Ellen) Wischmeier of Seymour. In addition to both parents, he was also preceded in death by a daughter, Julie A. Moore, and brother-in-law, Donald Cooper. Funeral services will be conducted at 1:00 p.m. on Thursday, November 5, 2015 at St. John’s Lutheran, Sauers, with Reverend Craig Muhlbach officiating. Friends may call from 4:00 p.m. to 8:00 p.m. on Wednesday, November 4, 2015 at Spurgeon Funeral Home, Inc., Brownstown, and from noon until the time of service on Thursday, November 5, 2015 at St. John’s Lutheran, Sauers. Burial will be at St. John’s Lutheran Church, Sauers Cemetery. Memorials may be given to Julie A. Moore G.I. Cancer Research Fund, St. John’s Lutheran Church, Sauers or Schneck Medical Center Foundation. Online memorials and condolences may be given at www.spurgeonfh.com

The family of Steven F. Schepman created this Life Tributes page to make it easy to share your memories.

Send flowers to the Schepman family.