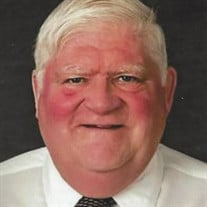 Thomas “Tom” Carl Gray, age 69, of Brownstown passed away on Sunday, October 2, 2016 at Schneck Medical Center, Seymour. Mr. Gray was a member of The Tabernacle. He served in the United States Army from 1965 to 1969. Mr. Gray owned Brock’s Restaurant with his wife until 2010, retired as an Electrician from Cummins Engine Co. after 30 years of service and was a meat cutter at JayC Food Store. Mr. Gray’s world centered around his faith, spending time with his family and watching his grandchildren grow. He was an avid University of Kentucky basketball fan and also enjoyed watching Nascar. He always had a desire to bring smiles and laughter with his sense of humor to everyone he met. Born on August 19, 1947 in Seymour, Indiana, he was the son of Hugh L. “Jeff” and Bobbie O. Harris Gray, both of whom preceded him in death. On October 29, 1967, he married Sharon “Gayle” Brock and she survives in Brownstown. Survivors also include three daughters: Angela (Wayne) Gibson of Commiskey, Belinda (Scott) Bowman of Seymour, and Jennifer (David) Ridlen of Brownstown; three brothers: Michael “Mick” (Myrna) Gray of Ft. Myers, Florida, Jack Gray of Vallonia, and Terry Gray of Crothersville; one sister: Tammi (John) Hackman of Vallonia; six grandchildren: Morgan (Aaron) Luckey, Chalen (Esti) Bowman, Bethany Langdon, Hayden Gray, Levi Ridlen, and Dakota Ridlen; and two great-grandchildren, Lenora “Nori” Luckey and Ella Luckey. Besides his parents, he was also preceded in death by one granddaughter, Hannah Langdon. Funeral services will be conducted at 11:30 a.m. on Wednesday, October 5, 2016 at Spurgeon Funeral Home, with Rev. Glenn Seaman, Rev. Larry Arrowood and Rev. Scott Bowman officiating. Friends may call from 4:00 p.m. to 8:00 p.m. on Tuesday, October 4, 2016 at Spurgeon Funeral Home, Inc., Brownstown, and from 10:30 a.m. until the time of the service on Wednesday at the funeral home. Interment will take place at Fairview Cemetery, Brownstown, with full military honors to be presented by Veterans of Foreign Wars Post 1925, American Legion Post 89, Disabled American Veterans 47 and Vietnam Vets 7. Memorials may be given to The Tabernacle Building Fund. Online condolences may be given at www.spurgeonfh.com

The family of Thomas "Tom" Carl Gray created this Life Tributes page to make it easy to share your memories.

Send flowers to the Gray family.