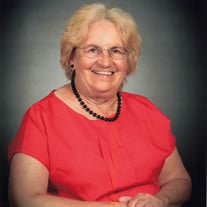 Verna M. Lewis, age 81, of Brownstown, passed away on Saturday, November 28, 2020, at Schneck Medical Center, Seymour. Verna was of the Methodist faith. She was a waitress at Brock’s Restaurant in Brownstown, and she was a member of Phx West Elks Club and Maryvale Moose Club, both in Phoenix, Arizona. Verna loved cooking for everyone, and especially loved making her apple dumplings. She also enjoyed playing Euchre at the Senior Citizens Center in Brownstown, listening to Gospel music and Bluegrass music and dancing with her husband Jack while they lived in Phoenix. Born on June 18, 1939, in Brownstown, she was the daughter of Ralph and Ethel M. Fordice England, both of whom preceded her in death. On June 20, 1964, in Columbus, she married John S. “Jack” Lewis and he also preceded her in death. Survivors include two sisters: Wilma (Lonny) Goen of Rushville, and Cheryl Wheeler of Brownstown; two brothers: James R. England of Brownstown, and Roger D. (Pam) England of Brownstown; three grandchildren; four great-grandchildren; one great-great grandchild; and daughter-in-law, Gwen Bohall. Verna was also preceded in death by her two sons: Steve Bohall and Willis Bohall; one sister, Patricia England; one brother-in-law, Ralph England; and sisters-in-law: Jean England, Jr. and Barbara England. Funeral services for Verna M. Lewis will be conducted at 11:00 a.m. on Wednesday, December 2, 2020, at Spurgeon Funeral Home, Inc., Brownstown, with Lonny Goen officiating. Friends may call from 5:00 p.m. to 7:00 p.m. on Tuesday, December 1, 2020, at Spurgeon Funeral Home, Inc. and from 10:00 a.m. until the time of the service on Wednesday, December 2, at the funeral home. Due to the Covid 19 Pandemic, Spurgeon Funeral Home, Inc. will be practicing social distancing according to CDC guidelines. Masks are required when entering the funeral home. Attendance is limited to 50 people at any given time. Interment will be at Fairview Cemetery, Brownstown. Memorials may be given to Hoosier Christian Village Auxiliary or Donor’s choice. Online memorials and condolences may be given at www.spurgeonfh.com

Verna M. Lewis, age 81, of Brownstown, passed away on Saturday, November 28, 2020, at Schneck Medical Center, Seymour. Verna was of the Methodist faith. She was a waitress at Brock&#8217;s Restaurant in Brownstown, and she was a member of Phx... View Obituary & Service Information

The family of Verna Mae Lewis created this Life Tributes page to make it easy to share your memories.

Send flowers to the Lewis family.