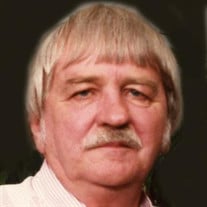 Vernon Taylor, age 77, of Seymour, Indiana, passed away on Monday, January 23, 2017, at Hoosier Christian Village, Brownstown, with his family by his side. Mr. Taylor was a member of Freetown Church of Christ. He retired from Cummins Engine Co. after 27 years of service and belonged to the Cummins Diesel Workers Union. Mr. Taylor was an avid I.U. and Cincinnati Reds fan. Born on September 19, 1939, in Jackson County, he was the son of Cecil and Lillie Ayres Taylor, both of whom preceded him in death. On October 8, 1971, he married Sue Perry Baughman in Hayden and she survives in Seymour. Survivors also include one son, Joe (Dorothy) Taylor of West Terre Haute; one daughter, Karen (Cleve) Nielsen of Port St. Lucie, Florida; two step-sons, Mike (Kathy) Baughman of Knoxville, Tennessee, and Richard (Nicole) Baughman of Seymour; one step-daughter, Lisha Baughman Self of Seymour; one brother, Carl (Bonnie) Taylor of Brownstown; 17 grandchildren: Jennifer Phillips, Brenda Soinski, Brandon Taylor, Deanna Jones, Misty Taylor, Lillee Taylor, Amberley Bays, Alex Nielsen, Justin Baughman, Travis Baughman, Joshua Self, Denise Baughman, David Baughman, Mitchell Baughman, Katie Brennen, Reid Baughman and Kellen Baughman; 26 great grandchildren; and four great-great grandchildren. In addition to both parents, he was also preceded in death by one brother, Robert Taylor, and one sister, Helen Taylor Sutton. Funeral services will be conducted at 11:00 a.m. on Friday, January 27, 2017 at Freetown Church of Christ with Barry DeWitt officiating. Friends may call from 4:00 p.m. until 8:00 p.m. on Thursday, January 26, 2017 at Spurgeon Funeral Home, Inc., Brownstown, and from 10:00 a.m. until the time of the service on Friday at the church. Interment will be at Freetown Cemetery. Memorials may be given to the Freetown Church of Christ or the American Kidney Foundation. Online memorials and condolences may be given at www.spurgeonfh.com

Vernon Taylor, age 77, of Seymour, Indiana, passed away on Monday, January 23, 2017, at Hoosier Christian Village, Brownstown, with his family by his side. Mr. Taylor was a member of Freetown Church of Christ. He retired from Cummins... View Obituary & Service Information

The family of Vernon Taylor created this Life Tributes page to make it easy to share your memories.

Vernon Taylor, age 77, of Seymour, Indiana, passed away on Monday,...

Send flowers to the Taylor family.