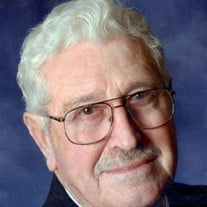 Wilbur Nieman, age 86, of Seymour, passed away on Saturday, June 10, 2017 at Lutheran Community Home, Seymour. Mr. Nieman was a member of St. John’s Lutheran Church, Sauers, where he was involved in the Men’s Club and Dartball team for many years. He retired from the Brownstown U.S. Post Office and farming. Mr. Nieman enjoyed gardening, the Farmer’s Market, working with his bee hives, as well as raising pecan trees. He and his wife, Irene, were members of Brownstown Western Twirlers. He was a member of the United States Navy for four years. Born on December 22, 1930, he was the son of William and Sophie Hageman Nieman, both of whom preceded him in death. On September 6, 1959, at Dudleytown, he married Irene Esther Claycamp, who preceded him in death on March 22, 2009. Survivors also include two sons: Byron (Winna) Nieman of Crothersville and Eric (Jennifer) Nieman of Seymour; two daughters: Sarah L. Nieman Toot of Seymour, and Rebecca J. (Jerry) Freeman of Columbus; six grandchildren: Ethan (Brianna) Nieman of California, Hannah Nieman of Muncie, Shane (Chelsea) Toot of Ohio, Noah Freeman of Columbus, Marcus Wakefield of Oregon and Dalton Duffy of Seymour; and one great grandson, Tobias Toot of Ohio. Funeral services will be conducted at 11:00 a.m. on Wednesday, June 14, 2017 at St. John’s Lutheran Church, Sauers, with Rev. Craig Muhlbach officiating. Friends may call from 4:00 p.m. until 8:00 p.m. on Tuesday, June 13, 2017 at Spurgeon Funeral Home, Inc., Brownstown, and from 10:00 a.m. until the time of the service on Wednesday at the church. Interment will be at St. John’s Lutheran Church, Sauers Cemetery, Seymour. Military honors will be presented by Veterans of Foreign Wars Post 1925, American Legion Post 89, Disabled American Veterans 47 and Vietnam Vets 7. In lieu of flowers, memorials may be given to St. John’s Lutheran Church, Sauers, Don & Dana Myers Cancer Center or Donor’s Choice. Online memorials and condolences may be shared at www.spurgeonfh.com

Wilbur Nieman, age 86, of Seymour, passed away on Saturday, June 10, 2017 at Lutheran Community Home, Seymour. Mr. Nieman was a member of St. John&#8217;s Lutheran Church, Sauers, where he was involved in the Men&#8217;s Club and Dartball... View Obituary & Service Information

The family of Wilbur Nieman created this Life Tributes page to make it easy to share your memories.

Wilbur Nieman, age 86, of Seymour, passed away on Saturday, June...

Send flowers to the Nieman family.