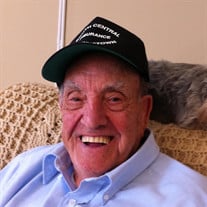 Zolla “Papaw” Lee Miller, age 87, of Brownstown, Indiana, passed away on Saturday, July 30, 2016, at Methodist Hospital, Indianapolis. Mr. Miller was of the Pentecostal faith. He retired from Kieffer Paper Mills in Brownstown, loved being with his grandchildren, working with livestock and tinkering with his tractor. Born on March 20, 1929, in Jamestown, Kentucky, he was the son of Estil and Bertha Foster Miller, both of whom preceded him in death. On February 17, 1951, in Jamestown, Kentucky, he married Drettie Oakes and she survives in Brownstown. Survivors include one son, Gary Lee Miller of Brownstown; one daughter, Doris D. Miller of Brownstown; two grandchildren, Paige Rightler (Devin) Davis and Dr. Jodi Lynn Rightler (Wilbert) McDaniels; and two great grandchildren, Bayley Alexis Davis and Palmyr Bryn Davis. In addition to both parents, he was also preceded in death by two brothers, James Miller and Virtreas Miller. Funeral services will be conducted at 1:00 p.m. on Tuesday, August 2, 2016, at Spurgeon Funeral Home, Inc., Brownstown. Friends may call from 11:00 a.m. until the time of the service on Tuesday, August 2, 2016, at Spurgeon Funeral Home, Inc., Brownstown. Interment will be at White River Valley Cemetery. Memorials may be given to the American Cancer Society or Alzheimer’s Foundation. Online memorials and condolences may be given at www.spurgeonfh.com

The family of Zolla "Papaw" Lee Miller created this Life Tributes page to make it easy to share your memories.

Send flowers to the Miller family.