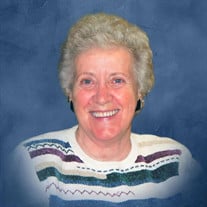 Armilyis “Millie” Terrell, age 89, of Brownstown, passed away on Wednesday, December 30, 2020, at Hoosier Christian Village, Brownstown. Mrs. Terrell was a member of Mt. Zion United Methodist Church. Millie was a homemaker, a factory worker and also a caregiver. She was a member of Eastern Star Lodge #264 Brownstown and the U.S.B.C. Bowling Association. Born on April 24, 1931, in Brownstown, she was the daughter of Russell and Gladys Barkman Baughman, both of whom preceded her in death. On September 29, 1951, in Uniontown, she married Gerald Terrell and he preceded her in death in 1996. Survivors include three sons: Gerald W. (Kendra) Terrell of Austin, Jack D. (Rhonda) Terrell of Vallonia, and Michael J. Terrell of Brownstown; three half brothers: Jerry, Larry and Jessie; 13 grandchildren: Tracy (Travis) Frazier, Jason Terrell, Stephanie Sparks, Jacob (Dixie) Terrell, Keri Jo Terrell, Tara (Donnie) Cockerham, Matt (Hayley) Terrell, Karec (Kaleigh) Terrell, Jaret (Amanda) Terrell, Eric Terrell, Garan Terrell, Ashley Chapman and Trista (Shane) Hart; and 25 great-grandchildren. She was also preceded in death by one daughter-in-law, Linda Terrell; four brothers: Russell Baughman, Jr., Morris Baughman, Raymond Baughman and Charles Baughman; one sister, Juanita Ross; one half sister; and one half brother. Funeral services for Armilyis “Millie” Terrell will be conducted at 3:00 p.m. on Sunday, January 3, 2021, at Spurgeon Funeral Home, Inc., Brownstown, with Pastor Mitchell McIntyre officiating. Friends may call from 12:00 noon until the time of the service at 3:00 p.m. on Sunday at the funeral home. Due to the Covid 19 Pandemic, Spurgeon Funeral Home, Inc. will be practicing social distancing according to CDC guidelines. Masks are required when entering the funeral home. Attendance is limited to 25 people. Memorials may be given to Smallwood Cemetery. Online memorials and condolences may be given at www.spurgeonfh.com

The family of Armilyis "Millie" Terrell created this Life Tributes page to make it easy to share your memories.

Send flowers to the Terrell family.