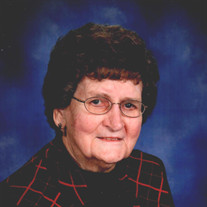 Bertha Anna Eggeman, age 99, of Seymour, passed away at Schneck Medical Center, Seymour, on Wednesday, September 25, 2019. Mrs. Eggeman was a member of St. John&#8217;s Lutheran Church, Sauers, and was active in the Ladies Aid at the church.... View Obituary & Service Information

The family of Bertha Anna Eggeman created this Life Tributes page to make it easy to share your memories.

Bertha Anna Eggeman, age 99, of Seymour, passed away at Schneck...

Send flowers to the Eggeman family.