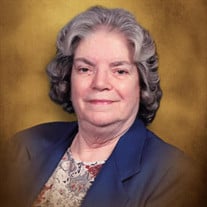 Betty Rose Underwood Londot, 91, of Brownstown, passed away peacefully at her home with her daughter by her side on Tuesday morning, November 24, 2020, following a sudden illness. Mrs. Londot was born on August 26, 1929, in Haleysburg, Washington County, Indiana. She was the second of seven children born to the late George E. and Mamie B. Spurgeon Underwood. On March 23, 1946, in Salem, Betty married William E. “Bill” Londot. He preceded her in death in 2008 after 62 years of marriage. Mrs. Londot was a loving mother and a homemaker. After her children were in school, she worked at several area businesses. The job she enjoyed the most was her job at Marion-Kay Spices in Brownstown, where she helped make their collectible commemorative silver coin clocks. Betty was a long-time member of Brownstown Christian Church, the Phythian Sisters at the Brownstown lodge, and was a current member of the Seymour Order of Eastern Star. She served as a Cub Scout and Girl Scout leader and advisor, and she was a proud team “mom” for her sons’ high school sports teams in the 1960s. She and husband Bill were charter members of the Hickory Hills Golf Club and played the rolling hilly course until their health slowed them down. She was an active member of the Brownstown Senior Citizens Club and loved to spend her mornings drinking coffee, gossiping and playing Euchre with her friends. Survivors include one daughter, Betty Sue (Bill) Baute of Brownstown; one son, Reverend David Lee (Debra) Londot of Stevensville, Michigan; two daughters-in-law: Mary Kloppenburg Londot and Ulla Larsen Londot, both of Brownstown; 12 grandchildren: James (Marie) Londot of Maryland, Jenny (Jeremy) Neal of Washington, Aaron (Julie) Schroer of Brownstown, Lisa (Brian) DeVault of Franklin, David Londot, Jr. and Mark (Amy) Londot of Michigan, Ryan (Caroline) Londot and Elizabeth Londot of Florida, Krista (Billy) Hopkins of New York, Lars (Lindsey) Londot of Texas, Philip Baute of Brownstown and Kathleen Baute of Medora; and 24 great-grandchildren. Betty was also preceded in death by two sons, Ronnie Dale Londot and Daniel Joe Londot; one sister, Bessie Nolan; five brothers: Charles “Bud” Underwood, Oscar Underwood, Ralph Underwood, George E. Underwood and Glen Dale “Butch” Underwood; and one infant grandson. Betty’s wishes were cremation and a memorial service. Due to the constraints of time, travel and the Covid-19 coronavirus, the family has decided to gather for a graveside interment and a Celebration of Life with family and friends in the spring when it is safe to gather together. Memorials may be given to the American Heart Association or the American Diabetes Association in care of Spurgeon Funeral Home, Inc., Brownstown, 206 E. Commerce Street, P.O. Box 143, Brownstown. Arrangements are being handled by Spurgeon Funeral Home, Inc. Online memorials and condolences may be given at www.spurgeonfh.com

Betty Rose Underwood Londot, 91, of Brownstown, passed away peacefully at her home with her daughter by her side on Tuesday morning, November 24, 2020, following a sudden illness. Mrs. Londot was born on August 26, 1929, in Haleysburg, Washington... View Obituary & Service Information

The family of Betty R. Londot created this Life Tributes page to make it easy to share your memories.

Send flowers to the Londot family.