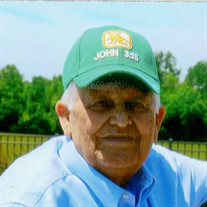 Carl Hardin Roberts, Jr., age 71, of Brownstown, Indiana, passed away on Saturday, October 1, 2016 at Schneck Medical Center, Seymour. Mr. Roberts was a member of Haleysburg Nazarene Church. He retired from Cummins Engine Co. after 40 years. He then worked at Versatech for nine years. He also served as Justice of the Peace in Jackson County from 1972 to 1974. Reflecting over Junior’s life, as family and friends called him, he was always a very loving and giving man. He enjoyed spending time with his family. He was a very active husband and father, coaching, leading cub scouts and attending sporting events. He was always a Christian example, both by leading and participating in his faith. He experienced a new joy as he loved being a part of his grandchildren’s lives. Family was the cornerstone for Junior and he sought out every opportunity to let us know we were loved. Most recently, Junior was blessed with three great-grandchildren that were “papaws little angels”, papaw’s little babies”. He was loved and will be sorely missed by his family. However, with the example and the commitment he made to Christ, we will see him again. Born on October 26, 1944, in Brownstown, Indiana, he was the son of Carl H., Sr. and Lorena Mae Weaver Roberts, both of whom preceded him in death. On November 18, 1962, he married Charlene Roberts, who survives in Brownstown. Survivors also include three sons, Mark (Tressia) Roberts of Crawfordsville, Matt (Wendy) Roberts of Brownstown, and Tim Roberts of Canon City, Colorado; one daughter, Tammy (Mark) Vehslage of Brownstown; one sister, Donna Barnes; ten grandchildren, Lenae (David) Anderson, Kristin (Jacob) Lough, Jacob (Barbara) Roberts, Matthew (Jodi) Roberts, Tim Roberts, Riley Roberts, Cheyenne Roberts, Jack Roberts, Kaitlyn Vehslage and Andy Vehslage; and three great grandchildren, Conner Roberts, Addilyn Anderson and Nolan Lough. In addition to both parents, he was also preceded in death by one brother, Jeff Roberts. Funeral services will be conducted at 10:30 a.m. on Thursday, October 6, 2016 at Spurgeon Funeral Home, Inc., Brownstown, with Sherman Beville officiating. Friends may call from 4:00 p.m. to 8:00 p.m. on Wednesday, October 5, 2016 at Spurgeon Funeral Home, Inc. and from 9:30 a.m. until the time of the service on Thursday at the funeral home. Interment will be at Smallwood Cemetery. Memorials may be given to the Haleysburg Nazarene Church or Schneck Medical Center Hospice. Online memorials and condolences may be given at www.spurgeonfh.com

The family of Carl Hardin Roberts Sr. created this Life Tributes page to make it easy to share your memories.

Send flowers to the Roberts family.