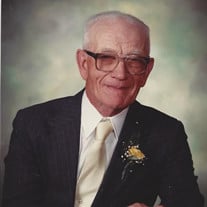 Cora W. Deckard, age 101, of Sarasota, Florida, formerly of Brownstown, passed away on Tuesday, October 25, 2016 at The Springs at Lake Pointe Woods, Sarasota, Florida. Mr. Deckard was a member of the Houston Christian Church. He was also a member of the Masons of Indiana Ninebeh Lodge No. 317 for 75 years. Born on March 3, 1915 in Brown County, Indiana, he was the son of Vernon and Daisey Strain Deckard, both of whom preceded him in death. On May 13, 1939, in Brownstown, he married Grace L. Hall and she preceded him in death on July 20, 1997. Survivors include one son, Roger A. and his wife Nancy Deckard of Sarasota, Florida; five grandchildren: Teresa and Todd of Minnesota, Holly and Michael of Indiana, Missy and Darrin of Tennessee, Margo and Charles, Mindy and Stephen all of Virginia; six great grandchildren: Veronica of Minnesota, Seamus of Tennessee, Grace and Peter, Andrew and Ryan all of Virginia. Besides both of his parents, he was preceded in death by one son, Lowell P. Deckard and his wife Ruth Fleming Deckard; three brothers; Earl Deckard, Murrel Deckard, and Leston Deckard; and three sisters, Beatrice Kennedy, Vella Fleetwood, and Vernetta Baxter. A grave side service will be conducted at 11:00 a.m. on Wednesday, November 2, 2016 at Houston Cemetery, with Pastor David Fisher officiating. In lieu of flowers, memorials may be given to Houston Cemetery in the name of Cora and Grace Deckard. Arrangements are being handled by Spurgeon Funeral Home, Inc., Brownstown. Online memorials and condolences may be given at [email protected]" title="Click to open in a new window or tab" target="_blank" rel="nofollow noopener">[email protected]

Cora W. Deckard, age 101, of Sarasota, Florida, formerly of Brownstown, passed away on Tuesday, October 25, 2016 at The Springs at Lake Pointe Woods, Sarasota, Florida. Mr. Deckard was a member of the Houston Christian Church. He was... View Obituary & Service Information

The family of Cora W. Deckard created this Life Tributes page to make it easy to share your memories.

Send flowers to the Deckard family.