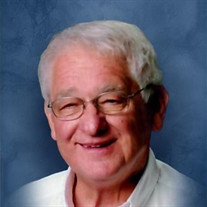 David G. Lucas, 79, of Brownstown, passed away on Saturday, June 22, 2019, at Methodist Hospital, Indianapolis, surrounded by his loving family. Dave was a lifelong member of the Brownstown United Methodist Church, and he was passionate about his faith in God. Dave earned his BA in 1961 from Ball State University and continued on to earn a Master’s Degree in Psychometry. During his undergraduate years at Ball State University, he designed the sign that sits today on the lawn of the Administration Building. In addition, he was a member of Sigma Phi Epsilon, and worked at the Residence Hall for several years while attending college. Subsequent to his graduation from Ball State University, Dave was on the faculty in the role of a Residence Hall Director, guiding the students and managing Residence Hall living. He then moved to Indianapolis and became the school Psychometrist for the Washington Township school system. This position led him to the Learning Disability Clinic at Riley Hospital, where the staff worked with parents, teachers and doctors to help students have greater success in overcoming their educational challenges. He also co-authored the book Mental Development of the Pediatric Patient with Larry Hartlage. In 1974, Dave and his family moved back to Jackson County. He joined his current business partner, Steve Ackerman, in operating Lucas-Ackerman Supply Co., Inc. in Brownstown, which was founded in 1946 by their fathers, Harry G. Lucas and Neal H. Ackerman. Lucas-Ackerman Supply Co., Inc. continues in its 73rd year. Because of their desire to help the community to expand services in Brownstown, they were instrumental in the coming of Hoosier Christian Village in Brownstown by providing land to build the facility. They also coordinated the construction of the facility. They further expanded their business adventures over the years by creating the subdivisions of Lucas Ackerman Additions, co-founded the Highlands Subdivision in Seymour, and Bloomington Supply and Tommy D. Windows and Doors located in Bloomington. Dave was immensely devoted to his community. He served for more than 20 years on the Jackson County Industrial Developmental Service Board, and served as Jackson County Councilman for many years. Dave was also a member of the Brownstown Chamber of Commerce and the Jackson County Home Builders Association. He loved boat rides, spending time with his family and friends at the Lake & Forest Club in Brownstown, working in his yard, gardening, grilling outdoors, and teaching his family and friends his grilling tricks and techniques, as well as showing them how to make his best marinades. Dave was an avid fan of the Indianapolis Colts and the Indianapolis Pacers, and was a season ticket holder for both teams for many years. Travel was always a highlight for the family. After hosting an exchange student from Germany, their travels expanded to many international sites often accompanied by Lina, their exchange student, and her family. Dave loved his family dearly and they loved him beyond measure. Born on September 12, 1939, in Seymour, he was the son of Harry G. and Eleanor Everoad Lucas, both of whom preceded him in death. On June 18, 1961, at St. Peter’s Lutheran Church, Brownstown, he married Jane Elizabeth Beickman. Survivors include his wife of 58 years, Jane Lucas; one daughter, Kimberly D. Lucas of Indianapolis; one son, Mark D. (Rachel) Lucas and two grandchildren: Harrison D. Lucas, and Catherine A. Lucas, all of Parker, Colorado; sister-in-law, Ruth Robertson of Brownstown; and nieces and nephews: Jami (Derick) Stuckwisch and Kirby (Justin) Stacks, all of Brownstown. Besides his parents, Dave was also preceded in death by a sister, Edith A. Lucas McAbee, and brother-in-law, John Henry “Butch” Robertson. Funeral services for David G. Lucas will be conducted at 2:30 p.m. on Saturday, June 29, 2019, at Brownstown United Methodist Church with Kevin Stiles and Jessi Langlie officiating. Friends may call from 2:00 p.m. until the time of the service at 2:30 p.m. on Saturday at the church. Family and friends are cordially invited to a Celebration of Life immediately following the service at W.R. Ewing in Brownstown until 8:00 p.m. Memorials may be given to the Brownstown United Methodist Church or to the Community Foundation of Jackson County in Dave’s memory through Spurgeon Funeral Home, Inc. Online memorials and condolences may be given at www.spurgeonfh.com

David G. Lucas, 79, of Brownstown, passed away on Saturday, June 22, 2019, at Methodist Hospital, Indianapolis, surrounded by his loving family. Dave was a lifelong member of the Brownstown United Methodist Church, and he was passionate about... View Obituary & Service Information

The family of David G. Lucas created this Life Tributes page to make it easy to share your memories.

David G. Lucas, 79, of Brownstown, passed away on Saturday, June...

Send flowers to the Lucas family.