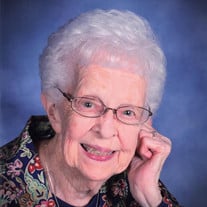 Dellie “Dell” Adams Bates Parker, age 92, of Brownstown, passed away on Wednesday, December 16, 2020, at her home surrounded by her family. Dell had a faithful saying – “God has blessed me with a good life and I am indeed thankful. Please do not grieve for me. I’m with my Wonderful Savior. Just think!!!!! I graduated……See you in Heaven………..”. She was a member of Brownstown Church of the Nazarene since 1971, where she held various church positions. She was also a member of Gideons International Auxiliary, where she also held various positions. Dell loved church and sharing Jesus with everyone. She cherished time with her family, loved reading, playing the piano and singing and volunteering at Hoosier Christian Village. She was a 1945 graduate of Emerich Manual High School in Indianapolis and retired from Cummins Engine Co. in January, 1986, after more than 15 years as an Executive Secretary. Born on February 6, 1928, in Indianapolis, she was the daughter of Jesse Lee and Lallie Lucy Hendrick Adams, both of whom preceded her in death. In 1955, she married Rev. Lee M. Bates and they together served several Nazarene churches throughout the southwest Indiana District. He preceded her in death on December 15, 1971. She then married Bain William “Bill” Parker in Brownstown in October, 1979, and he preceded her in death on January 12, 2004. Survivors include one daughter, Becky Janelle (Roger) Crockett of Brownstown; four grandchildren: Kourtnee Lee Crockett, Debby J. (Lynn) Meister, Shelley (Jim) Garrett and Scott (Natalie) Bates; three step-granddaughters: Kim (Jeff) Said, Elaine (Mark) Aikman and Paula Parker; 16 great-grandchildren; several step-grandchildren, great-grandchildren and great-great grandchildren; daughter-in-law, Maralyn Bates; step-daughter-in-law, Ruth Parker; and several nieces and nephews. Dell was also preceded in death by a son, Timothy “Tim” Bates; stepson, William Larry Parker; three brothers: Edward R. Adams, Daniel Lee Adams and Raymond “Ray” Adams; three sisters: Rachel Mader, Thelma Paul and her twin sister, Nellie Busby; and one step-grandson, Larry D. Parker. Funeral services for Dellie “Dell” Adams Bates Parker will be conducted at 12:00 noon on Monday, December 21, 2020, at Brownstown Church of the Nazarene with Tim Lichtley officiating. Friends may call from 10:00 a.m. until the time of the service at 12:00 noon on Monday at Brownstown Church of the Nazarene. Due to the Covid 19 Pandemic, Spurgeon Funeral Home, Inc. will be practicing social distancing according to CDC guidelines. Masks are required when entering the church. Attendance is limited to 25 people. Interment will be at Fairview Cemetery, Brownstown. Memorials may be given to Brownstown Church of the Nazarene or Gideons International. Online memorials and condolences may be given at www.spurgeonfh.com

The family of Dellie "Dell" Adams Bates Parker created this Life Tributes page to make it easy to share your memories.

Send flowers to the Parker family.