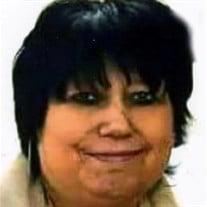 Donna Sue Hillenburg Callahan, age 49, of Medora, Indiana, passed away on Friday, March 24, 2017 at Kindred Hospital South, Greenwood, Indiana. Mrs. Callahan was a member of the First Assembly of God, Bedord, Indiana. She was employed at White River Lodge in Bedford and was activity director there for the past several years. She also worked as a certified nursing assistant and as an activity aid at Hoosier Christian Village, Brownstown. She loved her job and always had a smile on her face. She thought of others first, listened, talked and prayed with anyone that needed her help. She will be sadly missed by her family and friends. Born on February 13, 1968 in Bedford, she was the daughter of Donald and Fern Mikels Hillenburg, both of whom survive in Norman. On March 31, 1989, she married Vernon Callahan and he survives in Medora. Survivors include one son, Shane Callahan of Medora; one daughter, Ivy Sessions of Seymour; one brother, Terry (Amy) Hillenburg of Seymour; one sister, Cindy (Dale) Ehringer of Norman; three grandchildren: Domonic Parker, Christian Sessions and Gabriella Sessions; and several aunts, uncles, cousins, nieces and nephews. She was also preceded in death by one grandson, Bryson Parker; paternal grandparents, Elmer and Marie Hillenburg; and maternal grandparents, Melvin and Mildred Mikels. Funeral services will be conducted at 11:00 a.m. on Wednesday, March 29, 2017 at Spurgeon Funeral Home, Inc. Friends may call from 3:00 p.m. to 6:00 p.m. on Tuesday, March 28, 2017 at Spurgeon Funeral Home, Inc., Brownstown. Interment will be at Houston Cemetery. Online memorials and condolences may be given at [email protected]" title="Click to open in a new window or tab" target="_blank" rel="nofollow noopener">[email protected]

Donna Sue Hillenburg Callahan, age 49, of Medora, Indiana, passed away on Friday, March 24, 2017 at Kindred Hospital South, Greenwood, Indiana. Mrs. Callahan was a member of the First Assembly of God, Bedord, Indiana. She was employed at... View Obituary & Service Information

The family of Donna Sue Hillenburg Callahan created this Life Tributes page to make it easy to share your memories.

Send flowers to the Callahan family.