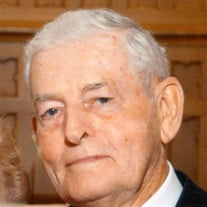 Jack A. Fountain, age 87, of Freetown, passed away on Sunday, November 5, 2017 at Hoosier Christian Village, Brownstown. Mr. Fountain was born on July 29, 1930 to Henry A. and Violet T. Parker Fountain in Medora, both of whom preceded him in death. He married Madge M. Gossman at Brownstown Methodist Church on May 1, 1955 and she survives in Freetown. Jack lived his entire life on the farm that has been in his family since 1913. He farmed with his father and grandfather and they raised Registered Polled Hereford cattle and operated Fountain Hereford Farm. Jack retired from farming in 1998. Mr. Fountain graduated from Brownstown High School in 1948 and attended Purdue’s Agriculture Course. He enlisted in the U.S. Air Force, attaining the rank of Staff Sergeant with the Air Police and was based in San Francisco and Germany. Mr. Fountain was a member of Brownstown United Methodist Church and the American Legion. He enjoyed boating, traveling and camping. When he was 75, he drove to Alaska for a six-week trip. He and Madge enjoyed winters in Ft. Myers Beach, Florida, from 1998 to 2015. Survivors also include one son, J. Andy (Linda) Fountain of Brownstown; one daughter, Julie (Tom) Kieffer of Brownstown; grandchildren: Marc (Molly) Fountain of Columbus; Ashley (Clint) Waskom of Brownstown; Betsy Kieffer of Columbus; and Thomas Kieffer of Columbus; great-grandchildren: Henry and Jack Fountain, and Ella and Bennet Waskom; and sister-in-law, Sheila (Joe) Reynolds of Brownstown. In addition to both parents, he was also preceded in death by one granddaughter, Jane Kieffer, and sister-in-law, Patsy VonDielingen. Funeral services for Jack A. Fountain will be conducted at 12:00 p.m. on Wednesday, November 8, 2017 at Brownstown United Methodist Church with Kevin Stiles officiating. Friends may call from 10:00 a.m. until the time of the service on Wednesday at the church. Interment will be at Fairview Cemetery, Brownstown. Military honors will be presented by Veterans of Foreign Wars Post 1925, American Legion Post 89, Disabled American Veterans 47 and Vietnam Vets 7. Memorials may be given to Brownstown United Methodist Church and Hospice of Schneck Medical Center. Arrangements are being handled by Spurgeon Funeral Home, Inc., Brownstown. Online memorials and condolences may be given at www.spurgeonfh.com.

Jack A. Fountain, age 87, of Freetown, passed away on Sunday, November 5, 2017 at Hoosier Christian Village, Brownstown. Mr. Fountain was born on July 29, 1930 to Henry A. and Violet T. Parker Fountain in Medora, both of whom preceded... View Obituary & Service Information

The family of Jack A. Fountain created this Life Tributes page to make it easy to share your memories.

Send flowers to the Fountain family.