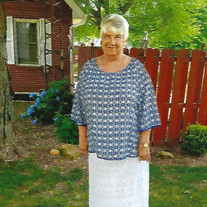 Judith K. Eastin, age 71, of Brownstown, Indiana, passed away on Friday, December 1, 2017, at Schneck Medical Center, Seymour. Judy was a member of Brownstown United Methodist Church. She retired from Family Drug as a Pharmacy Technician and was a caregiver. Judy was a member of Psi Iota Xi and was an avid bridge player. She loved spending time with her grandchildren and great-granddaughter, going on drives with her family, having coffee, visiting the Amish and participating in the Congenital Heart Walk at Butler University. She inspired her entire family. Born on January 30, 1946, in Seymour, she was the daughter of Clarence and Esther Robbins Rueter, both of whom preceded her in death. Survivors include two daughters: Lisa J. (Tom) McClusky and Kris S. (David) Aszman, both of Brownstown; one son, Thomas J. Eastin, Jr. of Brownstown; five grandchildren: Whitley Eastin (Trey Thompson), Eli McClusky, Robert “Bub” McClusky, Miranda McClusky and Zoeé K. Aszman; one great granddaughter, AudreeAnne Thompson; and former husband, Thomas J. Eastin, Sr. In addition to her parents, she was also preceded in death by an infant brother, Jerry Lee Rueter. Funeral services will be conducted at 10:00 a.m. on Tuesday, December 5, 2017, at Brownstown United Methodist Church with Kevin Stiles officiating. Friends may call from 4:00 p.m. to 7:00 p.m. on Monday, December 4, 2017, at Spurgeon Funeral Home, Inc., Brownstown, and from 9:00 a.m. until the time of the service on Tuesday at the church. Interment will be at Fairview Cemetery, Brownstown. Memorials may be given to the family through Spurgeon Funeral Home, Inc. Online memorials and condolences may be given at [email protected]" title="Click to open in a new window or tab" target="_blank" rel="nofollow noopener">[email protected]

The family of Judith K. Eastin created this Life Tributes page to make it easy to share your memories.

Send flowers to the Eastin family.