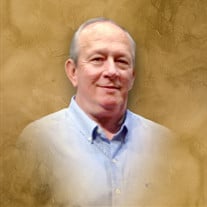 Larry DeWayne Parker, age 61, of Brownstown, passed away on Tuesday, August 13, 2019. Mr. Parker attended Kurtz Church of the Nazarene. He worked as an Engineering Associate with Cummins Engine Co. for 42 years, was a life-time member and supporter of the NRA, and took pride in always being a man of his word. Larry loved spending quality time with his family and friends, especially his children, grandchildren, and the Bill and Gina Bane family. He loved being involved in his sons’ lives, especially watching them play basketball like he did and carrying on four generations of Parker basketball legacy. Larry was an outdoorsman. He loved recreational sport shooting, riding and collecting motorcycles, motorsports, and his John Deere tractor. Early in his life, he enjoyed camping and fishing with his family. He was a voracious reader of non-fiction books, and enjoyed listening to music and going out to eat with his family and friends. Born on August 16, 1957, in Seymour, he was the son of William Larry and Ruth Fleetwood Parker. His father preceded him in death on September 26, 2017, and his mother survives in Brownstown. On August 27, 1983, at Brownstown United Methodist Church, he married Paula Crockett and she survives in Brownstown. Survivors also include two sons: Clint (Andrea) Parker, and Eric (Megan) Parker, both of Brownstown; two sisters: Elaine (Mark) Aikman of Wilmington, North Carolina, and Kim (Jeff) Said of Swayzee; three grandchildren: Olivia Parker, Lauren Parker, and William Parker, all of Brownstown; mother-in-law, Jane Crockett; brother-in-law and sister-in-law, Roger and Becky Crockett; step-grandmother, Dell Parker; and several aunts, uncles, nieces, nephews, and cousins. Besides his father, he was also preceded in death by his father-in-law, Paul Crockett. Funeral services for Larry DeWayne Parker will be conducted at 11:00 A.M. on Saturday, August 17, 2019, at Spurgeon Funeral Home, Inc., Brownstown, with Floyd Fisher officiating. In celebration of his life and birthday, friends may call from 4:00 P.M. to 9:00 P.M. on Friday, August 16, 2019, at Spurgeon Funeral Home, Inc., and from 10:00 A.M. until the time of the service on Saturday at the funeral home. Interment will be at White River Valley Cemetery. Memorials may be given to the Parker Grandchildren Education Fund. Online memorials and condolences may be given at www.spurgeonfh.com

Larry DeWayne Parker, age 61, of Brownstown, passed away on Tuesday, August 13, 2019. Mr. Parker attended Kurtz Church of the Nazarene. He worked as an Engineering Associate with Cummins Engine Co. for 42 years, was a life-time member and supporter... View Obituary & Service Information

The family of Larry D. Parker created this Life Tributes page to make it easy to share your memories.

Larry DeWayne Parker, age 61, of Brownstown, passed away on Tuesday,...

Send flowers to the Parker family.