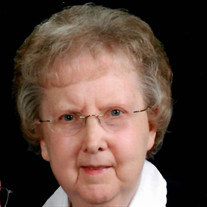 Lois Marie Nierman, age 81, of Brownstown, passed away peacefully on Sunday, April 21, 2019, at her residence surrounded by her family. Mrs. Nierman was a member of St. John’s Lutheran Church, Sauers. Lois worked at Indiana Telephone Company in Seymour and Schneider’s Nursery for many years. She also worked at Schneck Medical Center dietary department, retiring after 15 years of service. Born on September 23, 1937, she was the daughter of Amos and Erma Wischmeier Schuerman Darlage, both of whom preceded her in death. On August 24, 1958, she married Leland Nierman and he survives in Brownstown. Survivors include one son, Michael (Rachel) Nierman of Brownstown; one daughter, Lisa (Greg) Wischmeier of Brownstown; three step - brothers, Don (Judy) Darlage of Brownstown, Leroy Darlage, and Phillip (Diane) Darlage of Brownstown; one half - brother: David (Becky) Darlage of Seymour; five grandchildren: Lindsey (Clint) Sterling, Kyle Wischmeier, Michala Nierman, Matthew Nierman, and Mallory Nierman all of Brownstown; and one great-granddaughter: Lynleigh Ann Sterling of Brownstown. In addition to both parents, Lois was also preceded in death by her sister, Ruth Lambring. Funeral services for Lois Marie Nierman will be conducted at 11:00 a.m. on Wednesday, April 24, 2019, at St. John’s Lutheran Church, Sauers, with Pastor Craig Muhlbach officiating. Friends may call from 4:00 p.m. until 7:00 p.m. on Tuesday, April 23, 2019, at Spurgeon Funeral Home, Inc., Brownstown, and from 10:00 a.m. until the time of the service on Wednesday at the church. Interment will be at St. John’s Lutheran Church, Sauers Cemetery. Memorials may be given to St. John’s Lutheran Church, Sauers, or Schneck Medical Center Hospice. Online memorials and condolences may be given at www.spurgeonfh.com

The family of Lois Marie Nierman created this Life Tributes page to make it easy to share your memories.

Send flowers to the Nierman family.