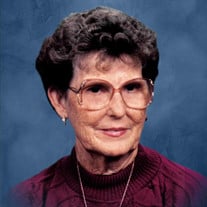 Lucille F. Bane, age 95, of Brownstown, passed away on Friday, September 25, 2020, at Hoosier Christian Village, Brownstown, surrounded by her family. Lucille was a life-time member of Ratcliff Grove Christian Church, and she also attended Brownstown Christian Church. She worked at Kieffer Paper Mill until she and her husband, Emmett, started Bane & Warren. Lucille was then General Manager for Bane & Warren Trailer Court and Bane & Warren Construction until the time she and Emmett retired. Lucille was the leader of the family and always instilled a good work ethic in them. She loved spending time with her family, as well as life-long business partners and extended family, the Warrens. She also loved helping people with her time and gifts. Lucille enjoyed being a part of the Golden Wheels at Brownstown Christian Church, spending the winter months in Florida with Emmett, traveling, fishing, camping, going on Toby Tours with Mary Jo and Sara, and attending Brownstown athletic events. Born on September 9, 1925, in Brownstown, she was the daughter of Chester and Florence McElfresh Goss, both of whom preceded her in death. On June 21, 1946, at Brownstown Christian Church, she married Emmett Bane and he preceded her in death on May 30, 2011. Survivors include one daughter, Sharon (Smith) Wills of Brownstown; two brothers: Joseph A. (Deloris) Goss of Brownstown and Chester Goss, Jr. of Brownstown; one sister, Mary Lou (Earl) Carr of Brownstown; sister-in-law, Goldie Goss; two grandchildren: Matthew Ryan (Jennifer) Smith of Brownstown and Jerri Kay (Doug) Hall of Brownstown; two step-granddaughters: Kim (Tim) Hurt of Seymour and Brandi (Mike) Burke of Southport; great-granchildren: Bentley Smith, Brailey Smith, Michael Burke, Sarah Burke and Emileigh Burke; and several nieces and nephews. Lucille was also preceded in death by a son, David Lee Bane; son-in-law, Jerry Smith, and son-in-law, John Wills; two sisters: Thelma Bell and Opal Davey; one brother, Walter Goss; and sister-in-law: Janet Allman Goss. Funeral services for Lucille F. Bane will be conducted at 12:00 noon on Wednesday, September 30, 2020, at Brownstown Christian Church. Friends may call from 10:00 a.m. until the time of the service at noon on Wednesday at Brownstown Christian Church. Due to the Covid 19 Pandemic, Spurgeon Funeral Home, Inc. will be practicing social distancing according to CDC guidelines. Masks are required when entering the church. Interment will follow at Fairview Cemetery, Brownstown. Memorials may be given to Brownstown Christian Church, Hoosier Christian Village Auxiliary or Donor’s choice. Funeral arrangements are being handled by Spurgeon Funeral Home, Inc., Brownstown. Online memorials and condolences may be given at www.spurgeonfh.com

The family of Lucille F. Bane created this Life Tributes page to make it easy to share your memories.

Send flowers to the Bane family.