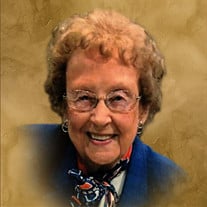 Lucille J. Nierman Wessel, age 93, of Columbus, passed away on Thursday, October 17, 2019, at Four Seasons, Columbus. Lucille graduated from Columbus High School in 1944. She then worked part-time at Cummins Engine Co. until she married Joe Nierman. She and her husband, Joe, owned and operated Nierman & Kuehn in Brownstown for thirty years. She loved clothing and managing their retail store. She held various church offices at St. Peter’s Lutheran Church, and was a member of Psi Iota Xi Sorority. She loved spending time with her family and playing Bridge in various groups. She relocated to Seymour after the death of her husband, Joe, and became a member of Immanuel Lutheran Church, Seymour. After relocating to Seymour, she volunteered over 9,000 hours during a period of more than 20 years at Schneck Medical Center Guild and Gift Shop. In 2017, she moved to Columbus to be closer to her family. Born on January 16, 1926, she was the daughter of Fred and Clara Welmer VonFange, both of whom preceded her in death. On August 15, 1948, she married Joseph D. Nierman and he preceded her in death on May 16, 1986. She then married Norris Gene Wessel on November 26, 1994, and he preceded her in death on June 7, 2006. Survivors include one son, Tim (Margy) Nierman of Columbus; one grandson, Joe (Sarah) Nierman of Indianapolis; one great-granddaughter, Alice Margaret Nierman; one step-son, Gary Gene (Rhonda) Wessel of Seymour; one step-daughter, Linda (Tom) Hallow of Brownstown; step-daughter-in-law, Jana Wessel of Brownstown; three nieces: Jane (Randy) Schepman of Seymour, Mary Ann (George) Hamilton of Zeeland, Michigan, and Jane Weeks of Indianapolis; and one nephew, Jeffrey (Jane) Nierman of Seymour. Lucille was also preceded in death by step-son, Danny Wessel; and siblings: Mabel (Harold) Tormoehlen and Kathryn (John) Nierman. Funeral services for Lucille J. Nierman Wessel will be conducted at 11:00 a.m. on Monday, October 21, 2019, at Spurgeon Funeral Home, Inc., Brownstown, with Pastor Jimmy Rodriguez and Pastor Philip Bloch officiating. Friends may call from 2:00 p.m. until 6:00 p.m. on Sunday, October 20, 2019, at Spurgeon Funeral Home, Inc., Brownstown, and from 10:00 a.m. until the time of the service on Monday at the funeral home. Interment will be at St. Peter’s Lutheran Church Cemetery, Brownstown. Memorials may be given to Immanuel Lutheran Church Stained-glass Window Fund, or Schneck Medical Center Foundation. Online memorials and condolences may be given at www.spurgeonfh.com

The family of Lucille J. Nierman Wessel created this Life Tributes page to make it easy to share your memories.

Lucille J. Nierman Wessel, age 93, of Columbus, passed away on...