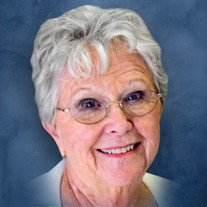 Nancy Tulledge passed away on Saturday, November 30, 2019, at Legacy Village Assisted Living in Xenia, Ohio, at the age of 89. Nancy was the middle child born to George and Lillian (Gehl) Perkins on January 28, 1930, in Oshkosh, Wisconsin. Nancy graduated as a Registered Nurse from the Mercy Hospital College of Nursing, Oshkosh, in 1951. Bob Tulledge was Nancy’s next-door neighbor growing up and her high school sweetheart. They were married on September 8, 1951, in Oshkosh. They had 3 children: Colleen Blevins, Roxann Patrick of Xenia, Ohio, and Jim Tulledge of Indianapolis. Bob and Nancy moved to Brownstown in 1966 when Bob was hired as the V.P. of Sales of Kieffer Paper Mills. Nancy worked as an R.N. for the Jackson Park Nursing Home in Seymour, and for many years as an R.N. at Hoosier Christian Village in Brownstown. Nancy was a devoted wife and mother, and dedicated many years of her life and nursing expertise to caring for loved ones and friends. Nancy and Bob were faithful and involved members of the Brownstown United Methodist Church throughout their 40 plus years as residents of Brownstown. Nancy was an amazing cook and enjoyed orchestrating and hosting large family meals at their home. She was an expert bread and pie baker and has many recipes she has passed down to children and grandchildren. She was an avid reader and fisherwoman, loved her doggies, and was a caring “Nancy Nurse” to the whole family. Nancy is survived by a brother, Roger Perkins of Greenlake, Wisconsin; children: Roxann (Tulledge) Patrick and Jim Tulledge; grandchildren: Shawn Mitchell, Trent Blevins, Megan (Blevins) Sortman, Aaron Tulledge, Josh Tulledge; step-grandson, Brian Patrick; and great-grandchildren: Kade Sortman, Jonah Sortman, Easton Tulledge, and Sofia Blevins. She was preceded in death by her parents; husband; sister, June Thomey; and a daughter, Colleen (Tulledge) Blevins. A Celebration of Life service will be held at 11:00 a.m. on Saturday, December 14, 2019, at Spurgeon Funeral Home, Inc., Brownstown, with Pastor Doug Pogue officiating. Family and friends may call from 9:00 a.m. until the time of the service on Saturday, December 14, 2019, at Spurgeon Funeral Home, Inc. In lieu of flowers, memorials may be given to the Legacy Village Foundation in care of the Nancy Tulledge Memorial Scholarship Fund. Checks may be made out to Legacy Village, include Nancy Tulledge Memorial Scholarship Fund in the memo field and mail to: National Church Residences, Legacy Village, Attn: Steve Throop, 695 Wycliffe Drive, Xenia, Ohio 45385. Online memorials and condolences may be given at www.spurgeonfh.com

Nancy Tulledge passed away on Saturday, November 30, 2019, at Legacy Village Assisted Living in Xenia, Ohio, at the age of 89. Nancy was the middle child born to George and Lillian (Gehl) Perkins on January 28, 1930, in Oshkosh, Wisconsin.... View Obituary & Service Information

The family of Nancy Tulledge created this Life Tributes page to make it easy to share your memories.

Send flowers to the Tulledge family.