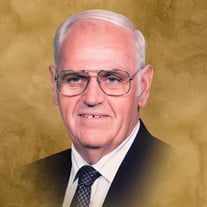 Norman Carol Brown, age 87, of Freetown, passed away on Tuesday, August 3, 2021, at his residence surrounded by his loving family. Mr. Brown was a member of Freetown Church of Christ and Brownstown Nazarene Church. He had a strong faith that God was him at all times. Carol was a tool maker at Cummins Engine Company for 37 years, beginning at age 18 and retiring at age 55. His family was very important to him. He loved his wife and family dearly and enjoyed spending time with them, especially camping, hiking, and traveling. Carol was also an avid hunter and loved hunting with his late son, Paul Richard. Mr. Brown was an honest, kind, and generous person and always put others before himself. He was always willing to help anyone in his community. Mr. Brown held various roles at Nebo and Freetown Church of Christ. He served in the United States Army, was a member of the Board of Directors of Cummins Credit Union, a member of the Brownstown School Board, and Trustee of Salt Creek Township. Born on April 21, 1934, in Houston, Carol was the son of George and Pearl Mitchell Brown, both of whom preceded him in death. On April 5, 1960, in Boise, Idaho, he married Mary Alice Leader and she survives in Freetown. Survivors also include one daughter, Anne Marie (Bryan) Martin of Freetown; grandchildren: Wendy (Cody) Hall, Kelly (Clayton) Lewis and Devon Paul Brown; daughter-in-law, Pam Brown of Bedford; and several nieces and nephews. Besides his parents, Mr. Brown was also preceded in death by a son, Paul Richard Brown; brother, Bobby Brown at birth; brother and sister-in-law, William “Buster” (Parthenia) Brown; two sisters and two brothers-in-law: Myrtle (Scott) Crider and Lois (Kenneth) Waggoner. Funeral services for Norman Carol Brown will be conducted at 12:00 p.m. on Monday, August 9, 2021, at Spurgeon Funeral Home, Inc., Brownstown, with Rev. Tim Lichtley and Rev. Barry DeWitt officiating. Friends may call from 10:00 a.m. until the time of the service at 12:00 p.m. on Monday at Spurgeon Funeral Home, Inc. Military honors will be presented by Veterans of Foreign Wars Post 1925, American Legion Post 89, Disabled American Veterans 47 and Vietnam Vets 7. Interment will be at Houston Cemetery. Memorials may be given to Donor’s Choice or The Salvation Army. Online memorials and condolences may be given at www.spurgeonfh.com

Norman Carol Brown, age 87, of Freetown, passed away on Tuesday, August 3, 2021, at his residence surrounded by his loving family. Mr. Brown was a member of Freetown Church of Christ and Brownstown Nazarene Church. He had a strong faith that... View Obituary & Service Information

The family of Norman Carol Brown created this Life Tributes page to make it easy to share your memories.

Norman Carol Brown, age 87, of Freetown, passed away on Tuesday,...

Send flowers to the Brown family.