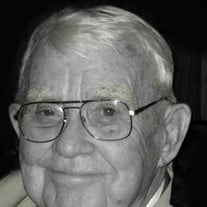 Ralph Andrew Mitchell, Sr., age 93, resident of both Marco Island, Florida, and Brownstown, Indiana, passed away on Monday, August 8, 2016 at his Brownstown home. Mr. Mitchell was a member of the First United Methodist Church in Brownstown. He enlisted in the United States Army in 1942 through 1946 and served in the Third Infantry Division in the European Theater from 1944 to 1946. He achieved the rank of Captain and received the Purple Heart, the Combat Infantry Badge, European Occupation Medal, two Unit Citations, and the Crux de Guerre while attached to the Free French Division. Mr. Mitchell received his Bachelor of Science Degree in Civil Engineering from Rose-Hulman Polytechnic Institute, where he later received an Honorary Doctorate Degree, as well. He was a professional civil engineer and founder of Mitchell & Stark Construction Company. He was a member of the American Legion, Lions Club, Elks Club and Masonic Lodge. Born on November 18, 1922, in Minden, West Virginia, he was the son of William K. and Hazel Marie Wooten Mitchell, both of whom preceded him in death. In July 1944, he married Laura Jane Cooper, and she preceded him in death on December 15, 1995. In October 1996, he married Sue Davis, and she survives. Survivors also include three sons, Ralph A. (Karen) Mitchell, Jr., Timothy C. (Joyce) Mitchell, Sr. and James W. (Connie) Mitchell; two daughters, Amy (Sam) Motazedi and Jeanne (Brian) Penner; three stepsons, Phillip (Linda) Davis, Steve (Lori) Davis and Jay (Cindi) Davis; one stepdaughter, Suzanne Davis (Don) Carlos; one sister, Ann Mitchell Bladen; 11 grandchildren; 11 great grandchildren; and one great-great grandchild. One sister, Anita Mitchell Oliver, also preceded him in death. Funeral services will be conducted in Brownstown at 1:00 p.m. on Sunday, August 14, 2016 at Spurgeon Funeral Home, Inc. with Reverend Kevin Stiles officiating. Friends may call from 4:00 p.m. to 8:00 p.m. on Saturday, August 13, 2016 at Spurgeon Funeral Home, Inc. and from noon until the time of the service on Sunday, August 14, 2016 at the funeral home. Interment will take place at Fairview Cemetery, Brownstown, with full military honors to be presented by Veterans of Foreign Wars Post 1925, American Legion Post 89, Disabled American Veterans 47 and Vietnam Vets 7. Memorials may be given to Community Kids’ Net through the Community Foundation of Jackson County. All donations received will go to children enrolled at Brownstown Elementary and Middle Schools. Online memorials and condolences may be given at www.spurgeonfh.com

Ralph Andrew Mitchell, Sr., age 93, resident of both Marco Island, Florida, and Brownstown, Indiana, passed away on Monday, August 8, 2016 at his Brownstown home. Mr. Mitchell was a member of the First United Methodist Church in Brownstown.... View Obituary & Service Information

The family of Ralph Andrew Mitchell Sr. created this Life Tributes page to make it easy to share your memories.

Send flowers to the Mitchell family.