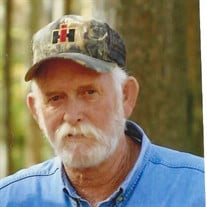 Terry Lee Henson, age 61, of Brownstown, Indiana, passed away on Tuesday, December 29, 2015 at St. Vincent’s Specialty Hospital, Indianapolis, Indiana. Mr. Henson was a retired truck driver and a Veteran of the United States Army. Born on July 12, 1954, he was the son of James and Alma Hatton Henson, both of whom preceded him in death. On September 13, 1973, he married Barbara Terry and she survives in Brownstown. Survivors also include one son, Tony (Heather) Henson of Brownstown and one daughter, Terri (Jerry) Marling also of Brownstown; one sister, Francis Dumond of Bedford; five grandchildren, Jessica Marling, Nicholas Marling, Bryson Butler, Addison Butler and Allison Mersmann; and one great grandson, Willy Wilson. In addition to both parents, he was also preceded in death by seven brothers and two sisters. Funeral services will be conducted at 10:00 a.m. on Saturday, January 2, 2016 at Spurgeon Funeral Home, Inc., Brownstown, with John Ray officiating. Friends may call from 1:00 p.m. to 4:00 p.m. on Friday, January 1, 2016 at Spurgeon Funeral Home, Inc., Brownstown, and from 9:00 a.m. until the time of service on Saturday at the funeral home. Burial will be at Fairview Cemetery, Brownstown. In lieu of flowers, memorials may be given to the family through Spurgeon Funeral Home, Inc., Brownstown. Online memorials and condolences may be given at www.spurgeonfh.com

The family of Terry Lee Henson created this Life Tributes page to make it easy to share your memories.

Send flowers to the Henson family.