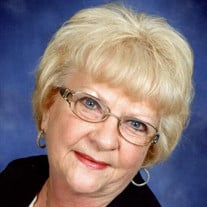 Wilma J. Wessel, 72, of Brownstown, Indiana, passed away at 8:30 p.m. Thursday, January 7, 2016 at Schneck Memorial Hospital following a three day illness. Born October 30, 1943 in Bedford, IN she was the daughter of Earl and Mildred (Lutes) Mitchaner. On April 3, 1964, she married William F. Wessel at Sauers Lutheran Church. Wilma was a member of St. Peter’s Lutheran Church and retired as Executive Director of the Red Cross in Jackson, Jennings and Scott counties. She was a member of Brownstown-Ewing Mainstreet, LWML, St. Peters Lutheran Church Foundation board, Jackson/Jennings County Chapter of Thrivent Financial, and the Heritage Park committee. She was also a Sunday school teacher, an Avon representative, and an usher at Lucas Oil Stadium for the Colts for 6 years. Wilma enjoyed being with her many friends and family. While she worked at the Red Cross, she touched many lives in the community. In her retirement, she volunteered many hours of service to her church and community and sold Avon to her many friends. To her family, she was an inspiration. She loved to spend time with her children, grandchildren, and great-grandchild, being a vital part of their lives. She would do everything with them from riding roller coasters to cooking their favorite dishes. Wilma always had encouraging things to say to those around her. She accepted and loved everyone for who they were. She could always make you laugh! Wilma lived as a woman of deep faith, witnessing to those around her of Jesus her Savior. Wilma was loved and will be missed by her husband, children and grandchildren and great grandchild, her large Wessel extended family and her many, many friends. Survivors include her husband, William, two daughters, Audrey (Gordon) Stoneburner of Austin, TX and Anita Goldstein of Trabuco Canyon, CA; six grandchildren: Amy Jean Stoneburner (Aaron) Mails of Seymour, Daniel (Liz) Stoneburner of Austin, TX, David Stoneburner of Houston, TX, and Matthew, Emily and Sophie Goldstein all of Trabuco Canyon, CA; and one great grandchild, Riley Ann Mails, of Seymour. She was preceded in death by her parents. Funeral services for Wilma J. Wessel will be conducted Tuesday, January 12, 2016 at 11:00 a.m. at St. Peter’s Lutheran Church, Brownstown, with Rev. Jeff Patterson officiating. Friends may call from 4 p.m. until 8 p.m. Monday, January 11, 2016 at Spurgeon Funeral Home, Inc. and from 10:00 a.m. until time of the service Tuesday at the church. Memorials may be given to St. Peter’s Lutheran Church or to the Community Foundation of Jackson County for the Brownstown Heritage Park Fund.

Wilma J. Wessel, 72, of Brownstown, Indiana, passed away at 8:30 p.m. Thursday, January 7, 2016 at Schneck Memorial Hospital following a three day illness. Born October 30, 1943 in Bedford, IN she was the daughter of Earl and Mildred... View Obituary & Service Information

The family of Wilma J Wessel created this Life Tributes page to make it easy to share your memories.

Send flowers to the Wessel family.